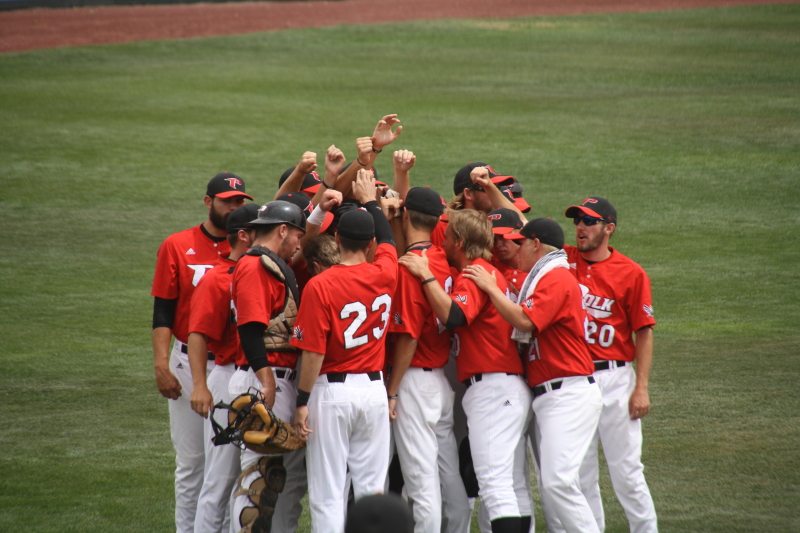 The Polk State Eagles huddle before taking the field against Western Nevada during the first round of the NJCAA JuCo World Series.

In what proved to be hardly a contest at all — in pitching or anything else — Polk State College beat Western Nevada 10-1 in Saturday’s opening round of the NJCAA JUCO World Series.

Days before the game, JUCO fans and media had centered their attention on the Polk State-Western Nevada matchup because of its potential as a hard-fought pitcher’s duel between two highly ranked MLB draft prospects. 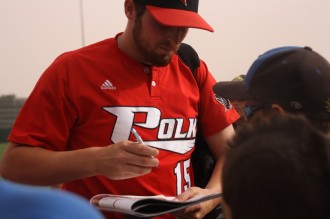 Polk State Pitcher Alec Asher signs autographs after the Eagles win in the first round of the NJCAA JuCo World Series.

Come game time at Sam Suplizio Field in Grand Junction, Colo., Polk State Head Coach Al Corbeil did lead off with Alec Asher, who is ranked as the No. 13 junior-college MLB draft prospect in the nation. Western Nevada, however, did not start No.1-ranked draft prospect Dylan Baker, instead fielding Andrew Woeck, a righty who is 7-2 with 81 strikeouts and a 1.42 ERA.

The pitching matchup, as it turned out, was stacked heavily in Polk State’s favor— though Polk State fans had a bit of a scare in the first inning.

With just one out on the board in the top of the first, Western Nevada loaded the bases, but their hopes were dashed with an Eagles’ double-play.

Asher said his dicey first inning was attributable to two elements: the enormity of the event and winds that at times exceeded 40 mph.

“I was nervous. I’ve never played in front of this many people before,” Asher said. The official attendance of the game was 3,208.

As for the wind — which for those in the stands turned peanut shells into painful flying projectiles — Asher needed that first inning to find the right groove. To account for the lift the wind would have on his throws, Asher began the game intentionally pitching extra low — a tactic that he quickly realized needed adjusting.

“I was able to find a happy medium,” Asher said. “Coach told me I didn’t have to throw quite as low.”

Asher stayed on the mound for the entire game, which because of Polk State’s runaway lead ended after only seven innings. Asher now holds a school record for wins in a season with 13.

As impressive as his performance on the mound was, Asher was also a standout in the batter’s box, taking the place of injured designated hitter Brett Jones.

“Without Brett, someone was going to have to step up,” Corbeil said. 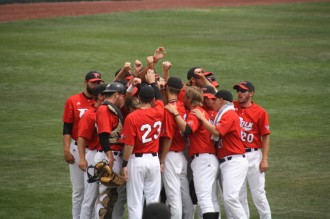 The Polk State Eagles huddle before taking the field against Western Nevada during the first round of the NJCAA JuCo World Series.

That someone was Asher. Asher said Polk State coaches approached him with the idea of hitting in the national championship before the team left Polk County, but the decision was made final on Friday.

“They told me they wanted me to hit, but to focus on pitching. They said that anything that might come of it would be a plus,” Asher said.

In the end, Asher’s contributions as a batter weren’t merely bonuses. In three at-bats, he scored one run and had four RBI’s.

Asher’s father, Bob, was also feeling shocked after the game, explaining that he hadn’t gotten used to having his son be the star pitcher of a state champion team, let alone the ace in a national championship.

“Alec has always been able to hit really well, but he knows his real calling is as a pitcher. But he will do whatever he needs to do to help his team, and that’s what he did today. He did his job.”

Also scoring for the Eagles were Conor Szczerba (2B), Erik Hindmon (C), Matthew Singletary (3B), all with two runs each, and Michael Danner (OF), Kyle Chastain (RF) and Drew Reeves (1B).

With a first-round victory on the books, the Eagles get a day off and plan to spend Sunday afternoon touring the Grand Mesa. They’ll be back on the field on Monday, squaring off at 4 p.m. (EST) against Jefferson College. All games can be seen live at http://www.ihigh.com/njcaatv/.

For more information on the team and its national championship pursuit, visit polkeagles.com.