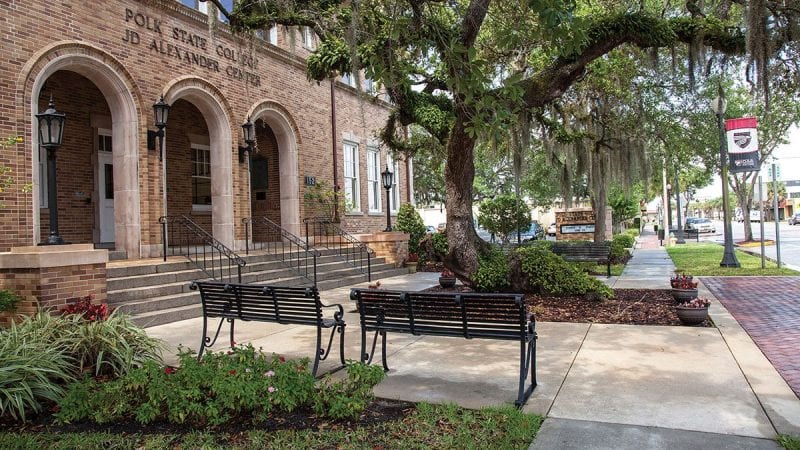 The sprawling century-old live oak tree that has become a trademark of the Polk State JD Alexander Center in Lake Wales will get some TLC over spring break.

Pruning and crown cleaning of the oak will take place Friday, March 30, to remove any dead, dying, diseased, or weak branches. Two live oaks on the east and west sides of the building will receive the same treatment.

“We don’t want people to think their beloved tree is being removed,” Center Director Andy Oguntola said. “There are many memories tied to this tree — it is part of the fabric of the Lake Wales community.”

“We are dedicated to preserving the tree and want people to know that it’s not going anywhere,” he said.

The oak has deep roots – literally and figuratively.

It is believed that the tree may have been there before the site became Lake Wales City Hall in 1928. The building served as City Hall until 1999 and is on the U.S. National Register of Historic Places. In 2006, the City of Lake Wales granted ownership of the downtown site to Polk State, which opened the Center in 2009.

The College renovated the Mediterranean Revival structure, preserving the brick exterior, ceiling scrollwork, and grand staircase, while fitting the building with the latest technology, classrooms, and a multipurpose room for College and community use. Polk State has also preserved the beautiful oak.

District Director of Facilities George Urbano explained that when renderings of the Center did not illustrate the tree to provide full visibility of the building for planning purposes, people were concerned and questioned where it was. Thus, it was added to subsequent renderings.

“It’s iconic and people don’t want to see the Center without it,” District Director of Facilities George Urbano said of the old oak. “Polk State is dedicated to maintaining the building, history, and culture, and that includes the tree.”

“It’s iconic and people don’t want to see the Center without it,” Urbano said of the old oak. “Polk State is dedicated to maintaining the building, history, and culture, and that includes the tree.”

“The work that will take place over spring break is part of the continued preservation of the tree’s longevity to ensure it remains a beautiful focal point of the historic center,” he added.

Earlier in March, the College commissioned an experienced arborist to assess the oak, as well as the other trees on the property, to determine the scope of work needed to provide proper care for the trees.

That assessment determined that the work to be done on March 30 is needed to main a healthy and thriving tree.

“When humans are sick, they go to the doctor,” Urbano said. “When we started to have concerns about the tree, we wanted to treat it with the same respect, so we brought a specialist in to take care of it.”

Maintenance to the trees will be completed in a day and there are no anticipated disruptions, as the Center will be closed for spring break from Friday, March 26, to Monday, April 2.