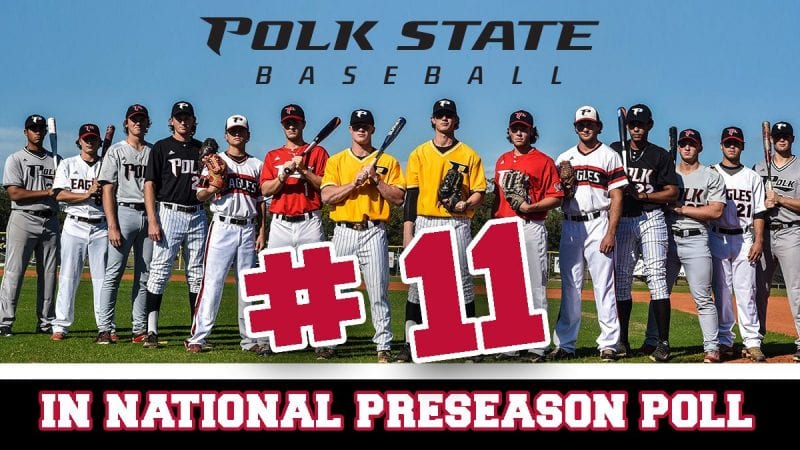 The Polk State Eagles start the 2017 baseball season on a lofty perch. They’re ranked No. 11 nationally in the preseason NJCAA D1 poll.

What’s the significance of the No. 11 ranking and how important is it?

It’s nice to be recognized nationally for the college and for our players. Junior college baseball in Florida is top tier year in and year out, and I think our goal is similar to a lot of other schools in that we want to be ranked No. 1 at the end of the season.

With 15 sophomores, you have an experienced team this season. How valuable is that experience?

We took our bumps and bruises last year with so many freshman in the lineup. I think we have a number of sophomores who have made adjustments and improvements from last year to this year, and we are looking forward to competing with the added experience we have this season.

Most of these sophomores played on last year’s team that won the Suncoast Conference and went 2-2 at the state tournament. How important was that tournament experience for them?

Winning our conference is a really difficult achievement in and of itself. Our 30-game conference schedule really tests a team’s durability and capability to make adjustments.

The state tournament takes it to a whole other level, with the best of the best playing with very limited time off. I thought we played well in the tournament last season, considering the injuries and lack of depth we had. We fell a little short, but our guys got a good taste of how good you need to be and how difficult it is to win the state tournament. I hope we can get another crack at it this season.

Injuries cost you several key players last season. Is everyone healthy at the start of 2017?

We had some unfortunate injures and setbacks last season, and that’s part of competing in athletics. As of now we are healthy to start the year, and we hope we can keep a healthy roster intact for the entire season.

The Eagles start the 2017 season Jan. 27 at Lake-Sumter State College.