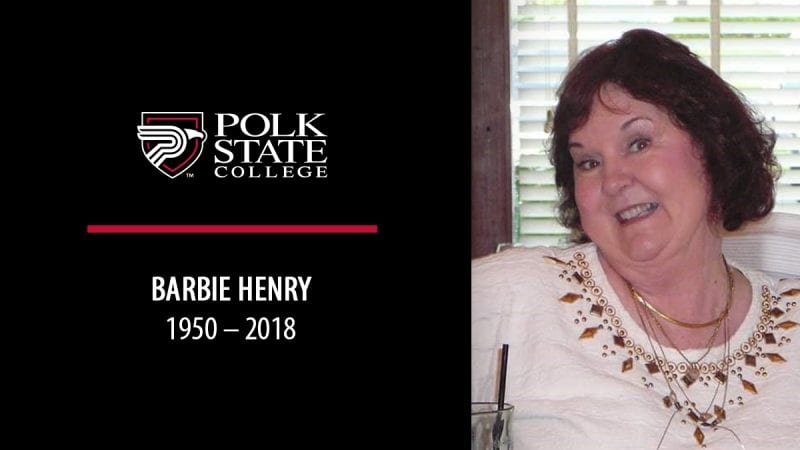 Barbie Henry had many restless nights, overcome with memories of her upbringing in a low-socioeconomic household and a motivation to process student records into the wee hours of the morning to ensure others had access to affordable, quality higher education.

Living a “stone’s throw” away from the Winter Haven Campus, Henry would spend late nights in the office only to make her way back a few hours later when she couldn’t sleep to get started on the day’s work.

“She would come in and manually process all of the paper applications, making sure that we never got backed up and that her staff was ready to go first thing in the morning,” recalled Susan Candia, Assistant Registrar who started at the College in 2001. Henry was her supervisor. “What really drove her was the students. She wanted the process to cause the least amount of stress for the students and she was willing to put in the extra work to make sure they were taken care of to the fullest extent.”

Henry started her career at Polk State College in February 1972 as a records clerk and retired in December 2002 as a Student Services supervisor. She passed away Dec. 26, 2018, at the age of 68.

Former colleagues and friends remember Henry for her selflessness, dedication to students, and meticulous attention to her work.

“She was the heart the College during her time. We have definitely lost a legacy.”

“She was the heart the College during her time,” said Jeanne Wagner, Continuing Workforce Education Specialist. “We have definitely lost a legacy.”

Wagner joined Polk State in 1996 and credits Henry with teaching her everything she knows about customer service.

“For her, it was all about listening to the students and working with them to resolve any issues,” Wagner said. “I was used to students coming in frustrated, but that all stopped when I started working her way. She taught us how to ease their frustrations while we worked to find solutions to their problems.”

Henry did so by going the extra mile to serve students. Supervisors are responsible for spot-checking student recordings, but Wagner thinks Henry did more than spot-checking – “she might have checked every single form.”

And when Henry oversaw the registration room, she routinely went through the line to troubleshoot students’ issues, trying to solve them before they got to an advisor and redirecting individuals who needed assistance with financial aid.

“She was a people person whose interactions with students, faculty, and staff were always genuinely friendly and caring,” Candia said. “She couldn’t walk down a hallway without stopping to speak with someone – she never met a stranger.”

Sherri Davis, Educator Preparation Institute Program Coordinator, met Henry when their daughters went to elementary school and became lifelong friends. She recalls Henry’s ability to be a great mother while handling her responsibilities as a College employee.

When the College remained open while Hurricane Andrew struck South Florida, Davis watched Henry’s daughter as Henry worked to ensure students received the service they needed as they were impacted by the hurricane.

“She always said she worked for the students, not the College, and that mentality has been ingrained in me since.”

“She was dedicated to the students,” Davis said. “She always said she worked for the students, not the College, and that mentality has been ingrained in me since.”

Davis added that she had never seen someone so happy to be a mother, and colleagues agreed that Henry always shared how proud she was of her daughter, DeAnna Clements.

Clements, who Henry adopted, called her mother a selfless individual who cared deeply for students and the community. She recalls many nights and weekends at the College with her mom.

She believed in its transformative power.

Clements added that Henry was very family oriented and, “couldn’t function properly without her hugs and kisses from Hot Rod and Rooster” – her nephews Cameron and Chandler Holmes. A celebration of life will be held Saturday, Jan. 19, at 5 p.m. in Winter Haven at Golden Corral Buffet and Grill, 5722 Cypress Gardens Blvd. In lieu of flowers, Henry’s family requests donations be made in her honor to the Children’s Home Society.