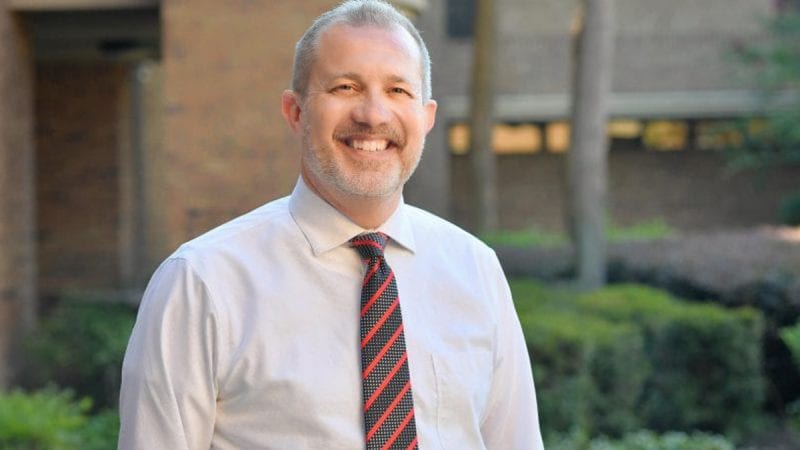 He recalls stomping his foot on the floor and declaring that he would never be a teacher. Seven-year-old Thomas had plans to become an astronaut instead.

But by the time he graduated high school, he was simply looking for a full-time job to pay the bills, and a security position at Mississippi State University was the perfect fit. As an employee, he could take courses for free to keep his parents at bay.

“It’s true, however, that the more you try not to be like your parents, the more you become like them,” Thomas said. “The more I pushed away from education, the more it dug its claws into me.”

He completed his bachelor’s degree in Business Administration and continued in his position with university security. It paid the bills.

He didn’t even attend graduation because he had to work. That didn’t sit well with the university president, who had come to know Thomas as the security guard who locked up his building each night.

“Dr. (Donald) Zacharias had taken me under his wing and he asked me what I was going to do next,” Thomas said. “I told him I was going to keep working and he told me, ‘oh no you’re not – you’re going to graduate school.’”

Thomas wasn’t confident with his 2.5 grade-point average and swapped duties with a coworker to avoid Zacharias on the southside of campus. But that only worked for so long. Six months later, he was ordered to lock up the administration building.

Even with words of encouragement from the university president, Thomas couldn’t afford to take the Graduate Record Exam (GRE).

“And I did OK on it,” Thomas said. “I didn’t think I was cut out for graduate school, but a common theme in my life has been that people saw more in me than I saw in myself.”

“I didn’t think I was cut out for graduate school, but a common theme in my life has been that people saw more in me than I saw in myself.”

With advice from his mentor, who credited him with his strong interpersonal skills, Thomas completed his master’s degree in Counselor Education and Student Development.

This put him on a path he vowed as a child to never take, but Thomas quickly learned that education is a rewarding career.

He served as Assistant Director of Student Activities at Jacksonville State University and then Auburn University in Alabama. There, he received encouragement from a new mentor to consider a doctoral program.

Thomas enrolled in advanced statistics and learning theory courses to test the waters.

“That’s when I truly fell in love with learning,” he said.

He moved to Pensacola to write his dissertation, but it wasn’t long before someone recognized Thomas and his talents. He met the head of Pensacola State College’s Behavioral Science/Human Services Department at the grocery store, and she asked him if he would like to teach.

Thomas became an adjunct professor, then a full-time faculty member. When the department head retired, the dean encouraged Thomas to apply for the job.

“Again, I did not see in myself what others saw in me,” Thomas said, “but I heard Dr. Zacharias whispering in my ear.”

He would go on to serve as department head and achieved his doctorate in Educational Psychology in 1998 from Auburn University.

In 2001, Thomas became vice president for program operations for the Children’s Services Center as part of a $20 million grant awarded to Santa Rosa and Escambia counties to implement early childhood education programs. But when funding was cut in 2002, Thomas was out of a job.

“I saw Polk State from the east and the west and recognized the quality of the faculty here. With my background as a faculty member and as a teacher at heart, that was the biggest draw for me to join the College.”

“I went back to what I knew – teaching and working hard,” he said. “I was a middle school teacher by day, delivering pizzas by night, and running my own painting company on the weekends just to get by.”

When he got on his feet, he was determined to return to higher education and became chair of the Social Sciences Department at Miami Dade College.

He went on to serve as an associate dean at the University of West Alabama, Dean of Social Sciences and Physical Education for Valencia College, and Dean of Academic Affairs for Hillsborough Community College, before joining Polk State in September.

“I saw Polk State from the east and the west and recognized the quality of the faculty here,” Thomas said. “With my background as a faculty member and as a teacher at heart, that was the biggest draw for me to join the College.”

He also credited Polk State President Angela Garcia Falconetti, who he calls a “leadership giant” like those who have mentored him along his journey.

Thomas plans to use his 28 years of experience in education to support the Polk State mission, contribute to the success of College goals, and to “do right by the students.”

“I can come in with my own goals, but the best goals are those that are shared within an institution and I am here to support Dr. Falconetti’s vision, the strategic plan, and our faculty, staff, and students,” Thomas said.

His advice to students is to develop a support network of individuals who will help them develop into the people they want to be. He admitted that while he was sometimes reluctant to take the advice of Zacharias and his mentors, surrounding himself with “giants” allowed him to become a leader himself.

“My joy comes from seeing potential in people and helping them find that within themselves … That’s my way of paying it forward after all of the individuals who have helped me along my journey.”

“Surround yourself with hardworking people who believe in your ability to accomplish great things,” he said.

When Thomas isn’t working, he is spending time with his spouse and stepson. He enjoys “crazy rollercoasters that go so fast they leave your soul behind,” freshwater fishing, and volunteering with a variety of organizations that assist the Lesbian, Gay, Bi, and Transgender community, individuals with HIV/Aids, and those with drug and alcohol addictions.

“My joy comes from seeing potential in people and helping them find that within themselves so that they can get their lives on track,” Thomas said. “That’s my way of paying it forward after all of the individuals who have helped me along my journey.”