Polk State College boosts the economy of Polk County by nearly half a billion dollars each year, a study released Monday has found. 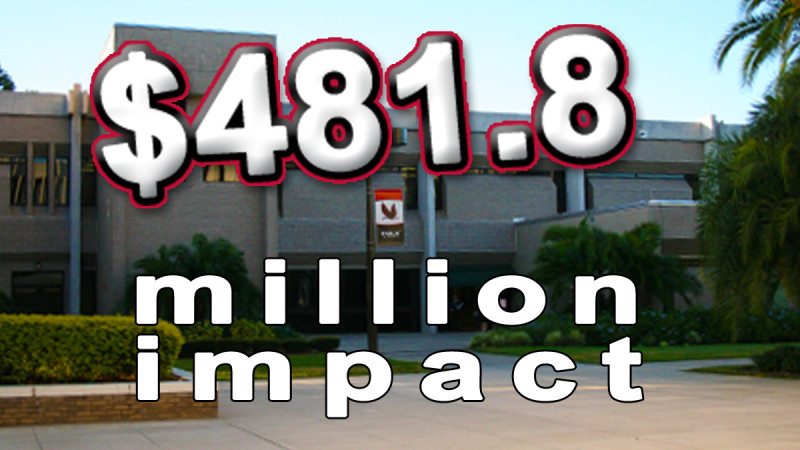 Idaho-based Economic Modeling Specialists, Intl., (EMSI), conducted the study, as part of a broader examination of the impact of the entire Florida College System (FCS); results of the broader study were also released Monday.

Of the College’s total economic impact, $443 million is a direct result of increased earnings students and alumni receive because of their Polk State College education.

The remainder of the College’s economic impact is comprised of operational expenditures.

“We are certainly very proud of this data,” said Polk State President Eileen Holden.  “Polk State truly impacts ‘the bottom line’ of its community, adding over $480 million in annual income to the local economy, through the earnings of our graduates. That’s a huge impact, and we expect that to grow in the coming decades.”

The release of the study elicited positive reaction from business leaders across the county.

“Polk State helps to create a pipeline of more highly trained workers, which is invaluable in attracting new businesses to the area. At the same time, having a quality, affordable higher-education institution right here at home goes a long way in retaining talent in Polk County. Polk State is an invaluable resource in the economic development of our county.”

“Polk State College is one of the best tools I have in my economic development toolbox. When speaking with business leaders interested in moving to our area, they demand a highly skilled workforce to fuel their business. The dedicated faculty and staff at Polk State have created the ideal setting for success, offering exceptionally qualified job candidates to our community every semester.”

The EMSI study also examined the College’s return on investment, both for students and taxpayers, finding:

A more detailed look at wages in Polk County found that those who have an associate’s degree earn $36,500 annually by the midpoint of their careers; this is 35 percent higher than those who have only a high school diploma. Because they earn higher salaries, Polk State’s graduates help to expand Florida’s tax base by $54 million each year, the study found.

Not only do Polk State alumni earn more money, they also have greater success in being hired after they graduate from programs designed to lead straight to the workforce (such as Business Administration, Public Safety and Nursing). Polk State was ranked No. 1 for student employment in 2010 and 2011, outperforming all other Florida College System institutions according to the Florida Department of Education.

Polk State attributes these results to the fact that it works closely with industry partners, from large corporations to hospitals to small businesses, in developing and refining its curriculum. In doing so, the College ensures that its students acquire the skills and knowledge Polk County’s employers demand.

“The data from the FLDOE speaks to Polk State’s integration with the local labor market,” said Peter Usinger, director of institutional research, effectiveness, and planning for the College. “Our programs produce people who are immediately employable.”

Thanks to its blend of affordability and sought-after degree programming, Polk State has seen remarkable growth in recent years. Between the 2006-07 and 2011-12 academic years, the College experienced a 63 percent jump in its full-time equivalent enrollment. Also, during the same time period, the College more than doubled its degree output.

The EMSI study showed that the need for the quality, affordable education Polk State provides will continue to grow in the future. By 2022, the study estimates there will be about 97,000 available jobs in the county that will require at least an associate’s degree.

Usinger added that the EMSI study does not take into account the economic benefit provided by special events at the College, everything from concerts to athletic events to summer programs for children. Therefore, the College’s true economic impact is likely even greater.

Polk State’s study was part of a broader look at the impact of the entire FCS. The results of that study, also released Monday, showed that the 28 FCS institutions pump an additional $26.6 billion per year into the state’s economy.

“We are certainly very proud of the data released today in Tallahassee,” Holden added. “It shows what Floridians have known for years: the state college system is a great investment and a huge impact on the state’s economy. These findings deserve close attention and will certainly get it — they are, after all, some big numbers.

“But nobody should be surprised by this data. Florida’s state and community colleges were established specifically to make this sort of an impact and to be the sort of value the report reveals.”

Polk State College, an open-access institution, was established in 1964, and serves more than 20,000 students annually. Its offerings include the Associate in Arts, which is parallel and fully transferrable to the State University System, and the Associate in Science, which is designed to lead directly to the workforce. The College also offers the Bachelor of Applied Science in Supervision and Management, Bachelor of Science in Nursing, Bachelor of Science in Criminal Justice, and a variety of continuing education and certificate programs. For more information, visit polk.edu.