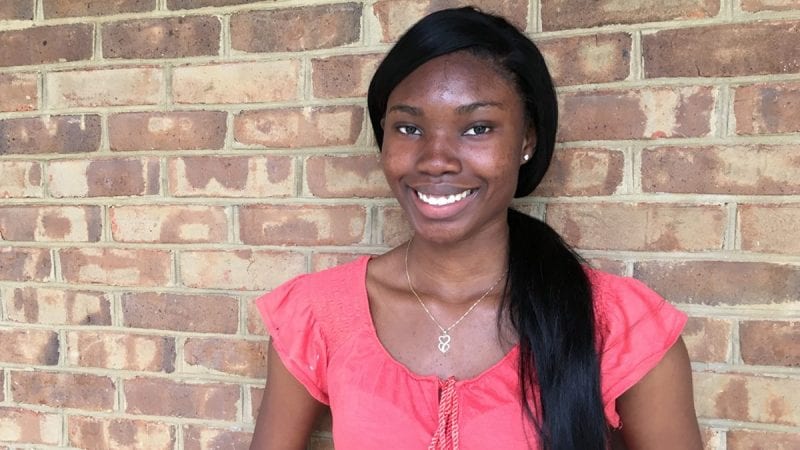 Tralicia Eason was barely doing enough to get by when she enrolled at Polk State Lakeland Gateway to College Collegiate High School, where she has gone above and beyond just getting by.

Eason, who will graduate today with Lakeland Gateway to College Collegiate’s fifth class, is heading to the University of Miami with more than $40,000 in scholarship money she has received for her academic achievements.

On top of her academic success, Eason has juggled two jobs and a slew of extracurricular activities, serving as president of the Student Government Association; participating in InterAct Club, Future Business Leaders of America, and Phi Theta Kappa International Honor Society; and running track.

But she wasn’t always such a go-getter.

“In 10th grade while I was going to school in Tampa, I wasn’t focused on my studies – I was having too much fun and not showing up for class,” she confessed. “I didn’t really have an interest in school.”

Her mother, who had a newborn and was recovering from surgery to treat a life-threatening complication of childbirth, moved from Tampa to Bartow while Eason stayed behind with her grandmother to finish her sophomore year of high school.

“My mom still got on me about my grades and going to school, but I really didn’t have anyone at home pushing me to do better,” Eason explained.

“I went from doing just enough to get by, to doing more than just getting by,” Eason said. “It’s bittersweet to see how much I have grown thanks to Gateway.”

From faculty and staff, to her peers, Eason said she received the motivation she needed to do her best.

“I went from doing just enough to get by, to doing more than just getting by,” Eason said. “It’s bittersweet to see how much I have grown thanks to Gateway.”

Eason received her Polk State Associate in Arts degree on May 3 with the College’s 118th graduating class, and aspires to become an obstetrician-gynecologist (OBGYN). She plans to major in chemistry with minors in psychology and biology, putting her on a premed track for future studies.

“My mom’s OBGYN allowed me to volunteer and shadow her, which really inspired me because there is more than the medical side of it – OBGYN’s develop personal relationships with their patients,” Eason said.

Eason wants to use those personal relationships to help build confidence in other women.

“I didn’t have a lot of confidence, and although I have always been interested in the medical field, I knew it was a male-dominated field, but I want women to know that they shouldn’t back down and that they are capable of anything,” she said.

Eason’s confidence has built over the last two years at Lakeland Gateway to College Collegiate thanks to “positive words from other people” and “the big support system I have had here.”

Her advice to incoming Lakeland Gateway to College Collegiate students:

“Make meaningful relationships, because there is a strong support system here,” Eason said. “You just need to build and maintain those connections,” Eason said.