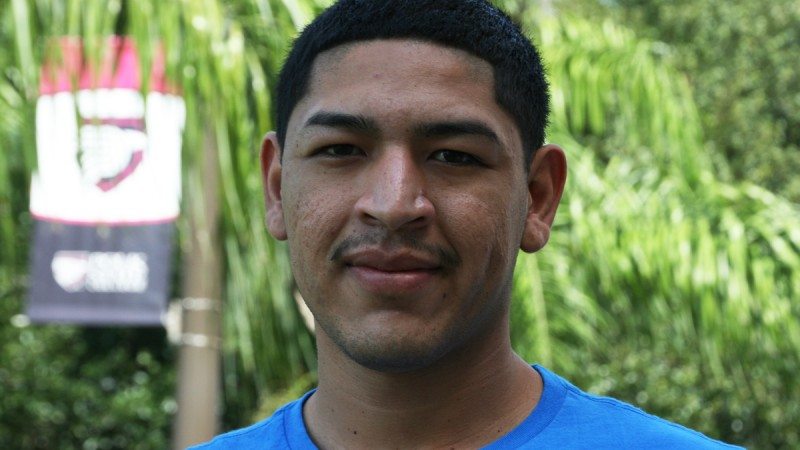 There’s a kind of light that radiates from student Alex Uribe, a genuine desire to do something good in this world, that is all the more remarkable for how many times life has tried to snuff it out.

In his mere 20 years, Uribe has known the pain of abandonment and addiction. He didn’t get to ease into adulthood — survival meant jumping in long before he was ready.

Yet, here he is, at Polk State College, two semesters from earning his first college degree, and in describing the hard road that brought him here, he uses words like “forgiveness” and “give back” and “make a difference.”

That light within him keeps shining, and combined with his Polk State education, he plans to use it to help others find their way — out of the grips of substance abuse, to a life that is happier and healthier than they’ve ever known.

“What would be the point of overcoming all that if I couldn’t help others,” he said. “Things happen for a reason.”

Born in Mexico, Uribe says his childhood was darkened early by his father’s alcoholism. When he was just 4, his mother left the home, taking with her Uribe’s younger brother.

Uribe, however, wouldn’t see her again until he was 18.

“That was devastating,” he said. “I remember being in third grade and we were having an Hispanic Festival around the time of Mother’s Day. Everyone’s mother was there — except mine,” he said.

Three years after his mother left, Uribe and his father sought a new start in the U.S. Uribe remembers well the rumbling bus trip, and the feeling that something good would be waiting for him on the other side.

“We were entering a new world,” he said. “This was the place of opportunity.”

Instead of that gleaming new start, Uribe found new heartbreak in America. Soon after they immigrated, Uribe’s father left him with an uncle in Haines City — and never came back.

“He couldn’t take the pressure of being a single father,” Uribe said. “For months, I kept my clothes packed in a backpack so I could go with him when he came back. I wanted him. I would cry for him.”

Slowly, though, Uribe accepted that his father wasn’t going to return. He unpacked his clothes and began his life. He wasn’t alone — surrounded by his uncle’s family — but he didn’t quite belong either.

“Things weren’t comfortable,” he said. “I learned about hard work, and how to be a man, and they gave me a place to live. I’m thankful for those things, but it wasn’t the same as being with my own family.”

The years that followed were sad and hard, to put it in the simplest of terms. He got into fights at school, failed the seventh grade. No one in his circumstances could really have been expected to do much better.

By 16, he’d run away to live with a cousin in Michigan. When others his age were experiencing the thrill of learning to drive and their first dates, Uribe was putting in 15-hour days, going to school and loading blueberries onto trucks headed for processing plants.

“There were so many mornings I didn’t want to get up,” he said. “My whole body hurt from the work.”

Maybe it was the grueling physical labor — which only education would deliver him from — or some instinct that at 16, on the cusp of adulthood, he was at an important juncture in life. Whatever it was, Uribe decided to make some big changes.

He had to get through high school. He had to go to college.

“I always had bad grades. I realized I needed to improve,” he said. “I just thought, ‘who says I’m never going to do anything in life and can’t go to college.’”

To turn his life around, Uribe returned to Polk County, where he knew there were people who would help him if he asked for it. People like Lydia Daniels, migrant advocate with the Polk County School Board, who helped Uribe enroll at Ridge Community High School.

“To me, he was just special,” Daniels said. “I saw in him a determination to pursue what he wanted to do. He had a lot of struggles, and everyone would tell him there was no way he was going to graduate, but I saw that he was determined to become what he made his mind up to be.”

Fueled by that inner determination, Uribe turned his academic life around, raising his grade-point average from a 1.9 at the beginning of his junior year, to a 3.0 when he graduated, he said.

His grades were just part of all the pieces that started to fall into place for Uribe, who just days before his 18th birthday was able to secure a legal guardianship, allowing him to remain in the U.S. and ultimately become a permanent resident in 2011.

Today Uribe is a full-time student at the College and works part-time in housekeeping at an Orlando hotel. He also tutors students at Ridge and works in the College’s Enrollment Services & Outreach department, where he uses his story of challenges overcome to inspire others.

“I think a lot of people are surprised by him,” said Enrollment & Outreach Services Coordinator Matina Wagner. “They think he’s just this regular kid, but then they find out the struggles he has known.

“They react to him with, ‘If he can do it, I can do it.’ I have seen the light bulb come on for numerous people as they talk to Alex. He is everyone’s cheerleader, in his own quiet way.”

Throughout his 20 years, one thing has remained constant for Uribe: He wants to become a psychologist to help those struggling with addiction. He remembers realizing early on the way alcohol changed his father and uncle; each sip altered their personalities. It was a scary thing to witness, but he made sense of it as a child.

Uribe plans on studying in the College’s Respiratory Care program after completing his Associate in Arts degree in spring 2014. While working as a respiratory therapist, he’ll continue his education in psychology.

While his goal of becoming a psychologist has remained constant, a new goal emerged as he has studied at Polk. Here, he has developed writing skills — and a love of the craft — and is now writing a book about his life experiences. Titled, Night Clouds, the book is a work in progress. But the ending? It’s going to be bright — with Uribe as its author, it couldn’t be any other way.

“I have a different perspective on what life has to offer,” he said. “Things will always be OK. If you decide to do the right thing, everything will come out OK.”